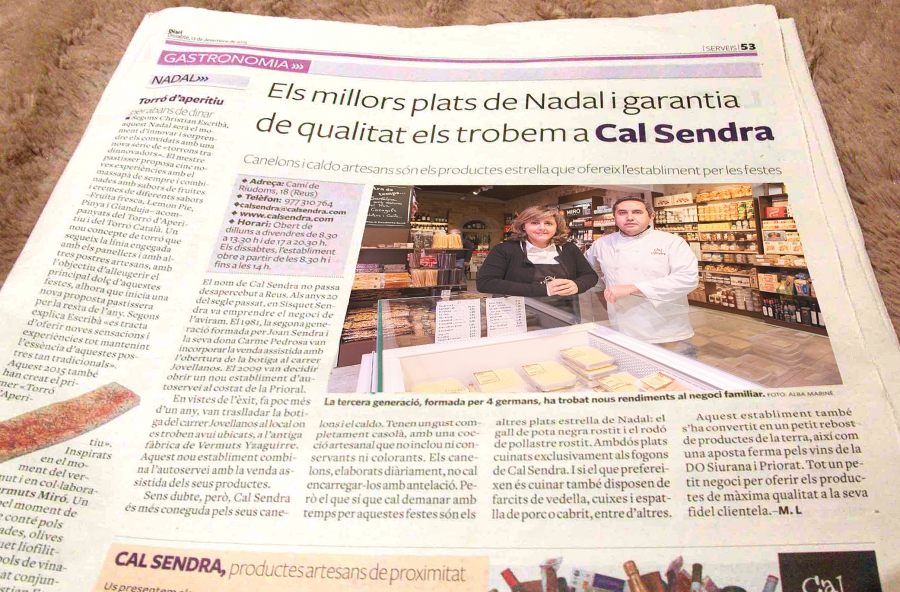 On December 12 we were published on the Diari de Tarragona!

The name must not go unnoticed Sendra Reus. In the 20s of last century, in Sisquet Sendra undertook the business of poultry. In 1981, the second generation formed by Joan Sendra and his wife Carmen Pedrosa joined assisted sales with the opening of the store on the street Jovellanos. In 2009 they decided to open a new store next to self Priory.

In view of the success, just over a year, the store moved Jovellanos Street where the premises are now located in the former factory vermouth Yzaguirre. This new facility combines self assisted with the sale of its products.

Undoubtedly, however, Cal Sendra is known for its cannelloni and broth. They taste completely homemade cooking with a craft that does not include preservatives or colorings. Cannelloni, made daily, do not need to order them in advance. But what you do need to book in time for the holidays are Christmas star dishes: Roast the cock leg and black round roast chicken. Both dishes in the kitchen exclusively Cal Sendra. And if you prefer to cook also have stuffed veal, thighs and shoulder of pork or lamb, etc.

This has also become a small pantry produce, as well as a firm commitment by the wines of DO Siurana and Priorat. Even a small business to provide the highest quality products.